Duck Block Games has launched a Kickstarter campaign for a 16-bit styled ‘Metroidvania’ adventure videogame, Forsaken Castle, and is targeting the Nintendo Switch as a release platform. The initial funding goal of $10,000 USD – which has already been surpassed – will see the title released on PC. PlayStation 4 and Nintendo Switch editions are available as stretch goals. 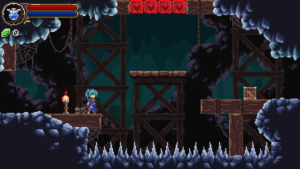 Forsaken Castle tells the story of Lily, a newly appointed paladin, who is sent to investigate the appearance of undead near the village of Atoh. Stumbling upon an old abandoned castle, Lily finds that within the stone walls unnatural things have begun stirring. Being new to her order and armed with a desire to prove herself a capable paladin, she decides to find a way into the castle and destroy the source of the undead, but doesn’t realise the evil she is ultimately about to face.

Duck Block Games are targeting an October 2017 release date for Forsaken Castle, with the videogame available as a backer reward for those who pledge $15 or more. The PlayStation 4 version will become possible once $20,000 has been pledged, while the Nintendo Switch version will unlock at $35,000.

Are you backing Forsaken Castle to bring it to Nintendo Switch? Let us know in the comments below!